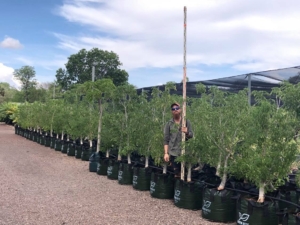 Adansonia kilima” is a species of baobab tree native to Africa, described in 2012. As with other baobabs, it is easily recognised by the swollen base of its trunk, which forms a massive caudex, giving the tree a bottle-like appearance. It is similar in appearance to the well-known ”Adansonia digitata”. ”Adansonia kilima” is found in upland populations of southern and eastern Africa,